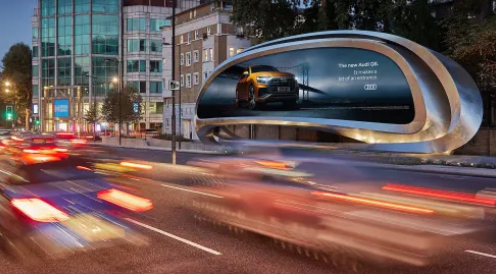 Spending on outdoor advertising is set to overtake newspaper ad sales in 2020 for the first time since records began, a global marketing milestone showing the resilience of billboards in the internet age.

The so-called “out of home” segment accounts for about 6.5 per cent of the $600bn global advertising market but stands out as the only traditional media that continues to grow as others give ground to Google and Facebook. While sales of billboards and bus shelter ads have held up, print advertising has been in precipitous decline, falling from a position 20 years ago where newspapers and magazines captured $4 in every $10 spent on marketing worldwide.

In 2020 advertisers will spend $40.6bn on outdoor posters and “street furniture”, about $4bn more than on newspapers, according to estimates from GroupM, the media buying agency. By 2024 GroupM expects outdoor advertising to exceed spending on newspapers and magazines combined, having expanded at an annual rate of between 2.5 and 4 per cent. “Outdoor advertising has been resilient because it retains unique characteristics for advertisers,” said Brian Wieser, global president of business intelligence at GroupM. “It helps that the medium has continued to evolve.” Outdoor ads are among the oldest forms of marketing, with a heritage that goes back to the shop signs of ancient Egypt and directions for brothels carved into Roman paving stones.

William Eccleshare, chief executive of Clear Channel, one of the biggest outdoor media owners, describes it as the “last true mass-reach medium” in a world where television audiences are fragmenting. While some operators have suffered recently in China, the US and UK have performed well, with growth in Britain of almost 8 per cent this year despite the flat economy. Apple has become one of the most active outdoor advertisers in recent years, while Netflix has acquired its own billboards along Los Angeles’ Sunset Strip.

The sector’s recent growth has come from embracing digital technology in big cities and airports, allowing more eye-catching adverts to be rotated within minutes or hours, rather than the weeks or months it took for physical posters to be replaced.

Digital sites account for 5 per cent of inventory at JCDecaux, the world’s biggest outdoor advertising group, but generate a quarter of revenues. In Britain, the world’s most digitised market, about 60 per cent of Clear Channel revenues are digital.

Stephen Whyte, global president of the agency Posterscope, said almost all growth in the sector was driven by digital sites, while the number of old “paper and paste” locations were shrinking. “All the new money is coming into the digital medium. The incentive to extend the paper estate is low, while the margins on digital are high,” he said.

The digital move has improved measures of effectiveness, a big weakness of a medium that had once relied on crude measures of footfall or car traffic to prove its influence.

Through location data on mobile phones, advertisers are now being offered the data to better plan the placement of a billboard to hit a target audience, and to measure how it may change consumer behaviour in nearby shops.

One concern of some operators is that oversupply and technology — including more buying of outdoor inventory in automated markets — could commoditise the medium, putting pressure on prices. “We should always remember that we are a mass-reach medium and that is part of what makes us special,” said Mr Eccleshare.

The British sector went through a wave of consolidation in 2018, as the radio group Global bought three companies in a matter of weeks to secure roughly a third of the outdoor advertising market.

Jean-Charles Decaux, joint chief executive of JCDecaux, said he hoped the UK moves would bring some more pricing power to the market.

“People think that by overbidding you can build a strong record,” he said. “The industry will gain in the future by being more rational.”